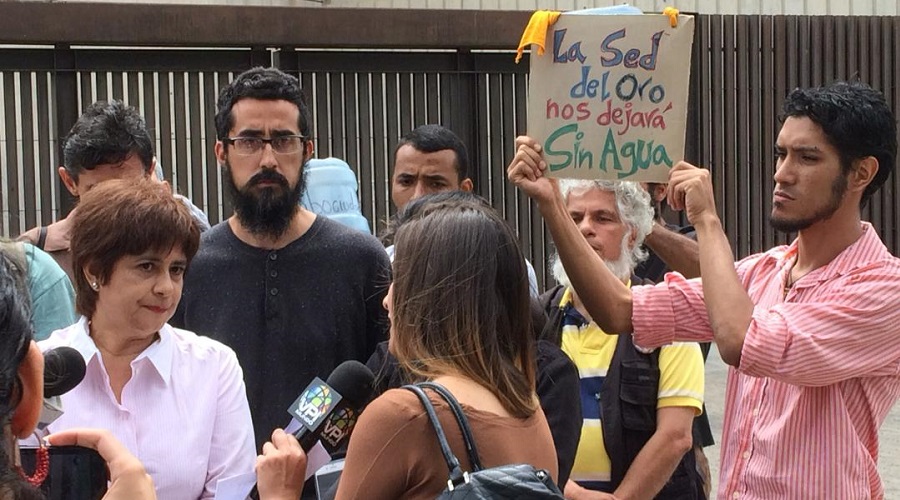 The Venezuelan Ministers of Mining Ecological Development, Víctor Cano, and Indigenous Peoples Aloha Núñez met with 15 captains from the Pemón tribe and, according to state media, reiterated that it is illegal to carry out mining activities in National Parks.

According to official outlets, the Indigenous leaders from the southeastern Gran Sabana municipality presented Cano and Núñez with complaints regarding environmental debts that have  dragged for decades and with concerns regarding the boundaries of the Orinoco Mining Arc.

“The Pemón people ratified their commitment to boost the reorganization process of mining operations south of the Orinoco river and rejected the environmental debt that illegal mining has created. They also agreed on doubling efforts to protect nature,” Cano was quoted.

According to the mining minister, the Orinoco Mining Arc was created to confine mining activities to a specific area and safeguard national parks and other protected areas.

His words comments contradict a recent report by human rights group Kapé-Kapé who denounced that illegal mining is rampant in and around the controversial Mining Arc of the Orinoco River National Development Strategic Zone, which is a 111,843 square-kilometre concession area that is equivalent to 12.2% of the country’s landmass and where gold, diamonds, iron ore, copper, bauxite, coltan, among other resources are mined.

Such artisanal and unregulated operations, Kapé-Kapé reports, are polluting the Carrao river and its tributaries within the Canaima National Park, in the southern Bolívar state which is the traditional territory of the Pemón. They are also affecting the Imataca forest reserve, the biosphere reserve of the High Orinoco, the Yapacana National Park and El Caura National Park.

Kapé-Kapé said that even though artisanal gold mining has been taking place in the Bolívar state for at least three decades, the practice is experiencing a revival due to the presence of dissident guerrilla men from Colombia, who create alliances and gangs with the miners.

“Indigenous and non-Indigenous communities in the region have denounced this problem many times. They estimate that there are up to 2,000 gangmen carrying out criminal activities related to the exploitation of mineral resources in the southern part of the country,” the group said.

Protest against the Mining Arc

As the meeting between the ministers and the Pemón was being reported, activists protested in Caracas at the Supreme Justice Tribunal against the inaction related to an appeal they submitted three years ago to repeal the decree that created the Orinoco Mining Arc.

Members of the Platform Against the Mining Arc, the Observatory of Political Ecology, and the Citizen Platform in Defense of the Constitution gathered before the country’s top court to denounce that their legal request has fallen on deaf ears. This, despite the fact that in their view and in that of many other conservation organizations, the creation of the Mining Arc through decree 2248 published in the Official Gazette No. 40.855 did not take into consideration any relevant studies related to the environmental impacts of such a massive development.

“With this decree, the President unconstitutionally assumes popular sovereignty belongs to him and awards himself supra-constitutional powers by making decisions related to the fragmentation of the national territory, the creation of new authority structures, special mechanisms related to public contracts, and easier routes for imports, while at the same time setting up tax privileges for those operating in the Orinoco Mining Arc,” the activists said in a statement made public via social media.

According to the protesters, the creation of the Arc has only caused more violence in Venezuela’s southeastern states, where hundreds of Indigenous people have been killed over the past three years, where organized crime is rampant and where the “law of the strongest” prevails.