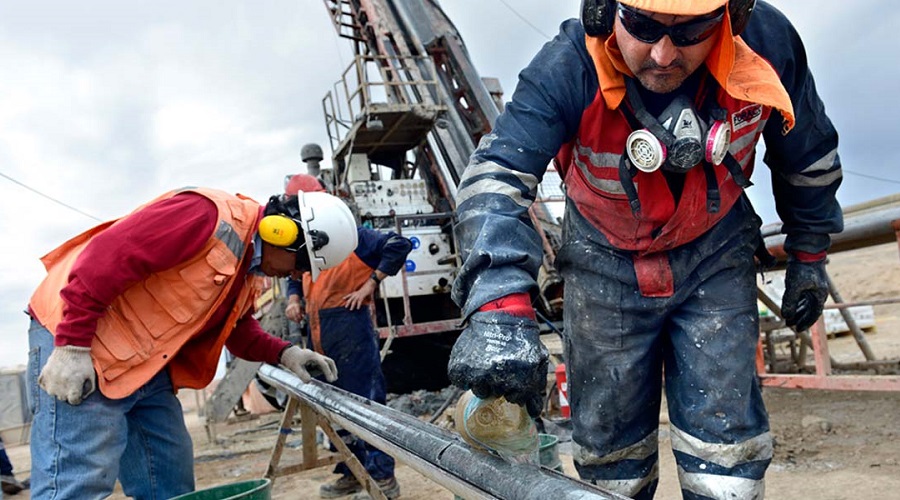 Antofagasta is among the Top 40 miners mentioned in PwC’s report. Pictured here is the company’s Centinela copper operation in Chile. Photo by Antofagasta.

The world’s 40 largest mining companies showed steady growth in 2018 and consolidated the positive performance they had over the past several years, a new report by PwC revealed.

In its Mine 2019: Resourcing the future report, the multinational professional services network states that, as a group, the top 40 mining firms increased revenue by 8% to $683 billion, buoyed by higher commodity prices and a 2% growth in production.

According to PwC, these companies also boosted their cash flows, paid down debt and provided a record dividend of $43 billion to their shareholders.

The firm’s experts highlight the good performance of copper miners such as Freeport-McMoRan, Antofagasta, Jiangxi, First Quantum, KGHM, among others, who comprise over half of the top 40 companies and are responsible for 55% of the global production of the red metal. 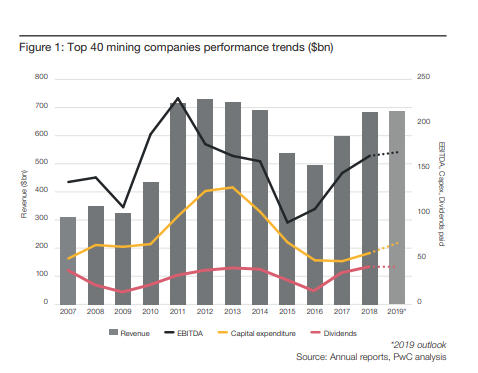 As those companies responded to higher copper demand, year-on-year production grew almost 7% and revenue was up 12%. However, 2019 is not looking as good as producers are forecasting a fall in output due to declining grades, higher costs, and the lengthy processes of bringing new projects online at a time when inventory levels are at ten-year lows.

Coal miners also had a positive 2018, as the black mineral, which supports 38% of the global electricity generation, remained the largest revenue-generating commodity, with prices growing by 21% and revenues by 12%.

“Top 40 coal production increased despite the selloff of coal assets by some. Glencore and Yangzhou acquired Rio Tinto’s remaining coal assets in Australia. Coal offtake agreements are often not at spot, explaining the difference between revenue and price growth,” the report reads.

PwC predicts that coal demand will continue to rise in the near to medium term due to the above-average economic growth of Asian countries. Past 2023, when renewable energy is expected to reshape the energy mix, coal consumption should plateau.

Also plateauing will be iron ore prices, the report says. Following an increase in production in 2018 driven by Australian and Brazilian companies’ expanded mines, demand was fulfilled and prices went down 3%.

The aftermath of the disaster at Vale’s Corrego do Feijão operation in late January is expected to have a mid-term impact on iron ore prices.

Climate change and other uncertainties

Despite the generally positive numbers, PwC’s analysis reveals that investors seemed unimpressed last year, judging by market valuations, which fell 18%. “While total market capitalization rose in the first term of this year, it remains 8% down compared to the end of 2017. Over the past 15 years, total shareholders’ return in mining has lagged that of the market as a whole as well as comparable industries such as oil and gas,” the document states.

In the view of PwC’s experts, investors’ reactions indicates that the market, with its perennial focus on the future, has reservations about the mining industry’s ability to respond to the risks and uncertainties of a changing world.

“With strong balance sheets and cash flows, now is the time for the Top 40 to address the issues weighing down market valuations. Climate change, technology and changing consumer sentiment are among the defining business challenges of our age,” the report states. “To restore faith in ‘brand mining’, leading miners need to prove they are keeping up with the pace of change. As an industry, this means transforming their reputation as efficient ‘converters of dirt’ to prominent builders of both economic and societal capital. Prioritising green and customer-centric strategies, enabled by technology, will help earn the trust of stakeholders and enable miners to create sustainable value into the future.”

According to PwC, investors worry about the variety of responses that mining companies give when it comes to climate change and the rising frequency of extreme weather events. While some firms have adopted climate change strategies, others are seemingly indifferent.

In general, the top 40 miners are performing strongly in terms of sustainability reporting, but PwC says stakeholders believe that disclosure is not enough and they want direct, measurable and visible progress.

Beyond their reduction in groundwater consumption and targets to decrease greenhouse gas emissions by one digit by 2020, investors seem to want mining giants to invest in green technology and in more environmentally friendly solutions for their respective commodity end uses.

PwC’s document predicts that copper and battery metals stand to gain in this context, as the energy mix moves away from combustion engines to electricity including renewable energy.

“The mining industry will have a window of opportunity over the next few years, created by strong operating fundamentals, to adapt to the growing and changing expectations of stakeholders. By utilising technology to operate safely and more efficiently, addressing global concerns, and maintaining a disciplined strategy to create ongoing value for its stakeholders, the industry can forge a better future for all beneficiaries of mining – industry, consumers, communities and other stakeholders,” the report concludes.