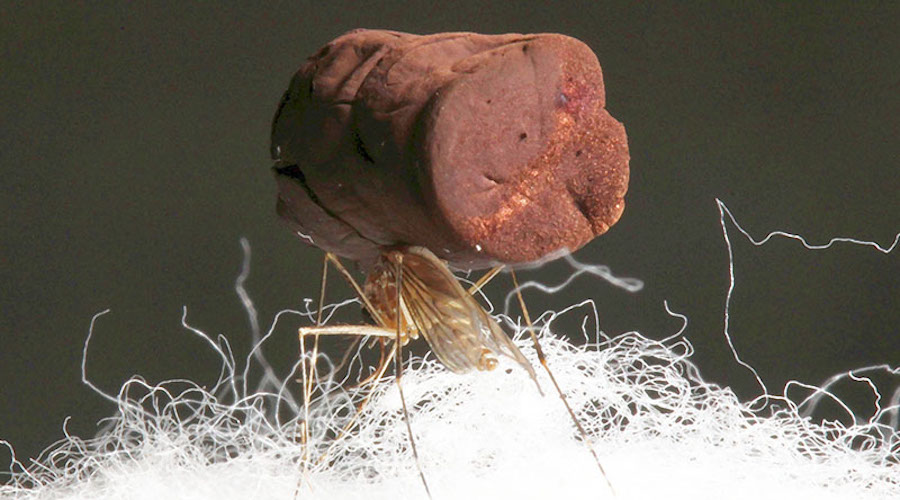 The ultra-low density gold, silver and copper foams are so tiny that they it can ride on a mosquito’s back. Pictured here is a mosquito standing on cotton fibers carrying a sample of the gold aerogel. Photo by Joshua DeOtte, Lawrence Livermore National Laboratory.

Scientists at the US Lawrence Livermore National Laboratory created ultra-low density gold, silver and copper foams to give physicists better X-ray sources to employ in experiments at the National Ignition Facility.

This facility is a large laser-based inertial confinement fusion research device that uses lasers to heat and compress a small amount of hydrogen fuel with the goal of inducing nuclear fusion reactions.

“We are looking primarily at fundamental science questions that govern how to synthesize, assemble and shape metal nanowire-based aerogels,” said the project’s principal investigator, Michael Bagge-Hansen, in a media statement.

Bagge-Hansen explained that although the material is called foam, it is not made by foaming. Rather, it is a spaghetti-like web of randomly connected nanometer-sized wires, formed into the shape of a miniature marshmallow and containing the same or fewer number of atoms as air.

To conduct this experiment, the research group sought different ultra-low density metals that could be used as targets for laser-driven X-ray sources for experiments further probing the properties of various materials placed under the extreme conditions possible when the National Ignition Facility’s 192 high-powered lasers are directed inside the target chamber.

According to Tyler Fears -one of the scientists involved in the project- each element emits a characteristic set of X-rays when heated by lasers into a plasma. “Metal foams can mimic gas even though they are made from materials that are not gas at room temperature,” he said.

To create the foams, the team freezes the nanowire inside a shape-creating mold typically filled with a water-glycerol mix. When it hardens, the nanowire looks like a mesh of frozen spaghetti.

The material is then removed from the mold and the frozen water is extracted by replacing it with the solvent acetone, which is then dissolved in a supercritical drying process using liquid carbon dioxide, leaving only the metal and air. “Supercritical drying ensures the liquid transforms into a gas phase without creating a meniscus that could damage the fragile ultra-low density metal foam structure,” Fears said.

Using this process, the experts have produced copper and silver foam, and silver has performed well at the National Ignition Facility.

When it comes to gold foams, Fears said they still tend to fall off the mounts that hold them in front of the lasers. “That’s the challenge we’re trying to overcome now,” he said.