On Wednesday, hopes that an escalation of the trade war between the US and China can been avoided (or at least postponed) sparked a massive rally in mining stocks – already buoyed by climbing metals prices.

US President Donald Trump said yesterday he may not increase tariffs on Chinese products on March 1, as talks about the trading relationship between the world’s two largest economies continue in Washington.

The US imposed an import duty of 10% on $200B worth of Chinese goods in September. The rate was scheduled to rise to 25% at the beginning of the year before being postponed. 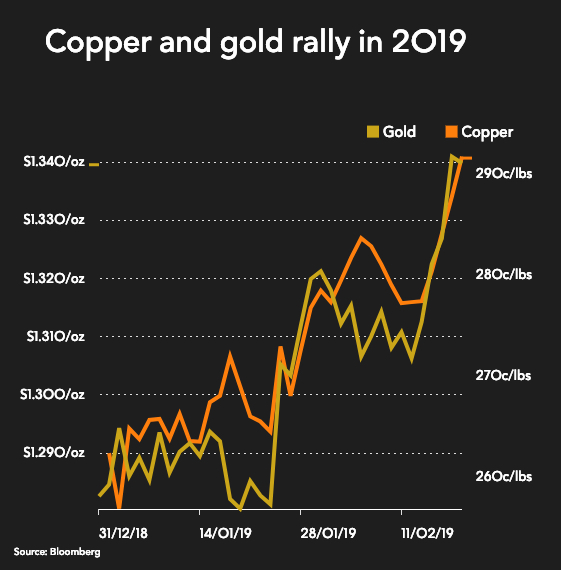 Investors piled into the sector’s big names at the open, but enthusiasm waned in afternoon trading. Glencore got the ball rolling with strong financials for 2018 and a $2 billion share buyback program. Sector watchers are also anticipating bumper profits when BHP, Rio Tinto and Anglo American report in the next fortnight.

Swiss-based Glencore added 2.6% in over-the-counter trading in the US while BHP added 2% — lifting the market valuation of world’s largest mining company by revenue to $140B in New York and bringing it within shouting distance of a one year high.

Number one and two iron ore miners Vale and Rio Tinto’s gains were more modest on the day, but Rio is now nearly 16% up since the start of the year. Vale, still reeling from the fallout of a deadly disaster at one of its iron ore operations in Brazil, has retreated 17% over the last four weeks.

Among large diversified mining companies, Anglo American was the best performer, jumping 2.3% after palladium futures settled at fresh record highs and hopes build for a turnaround at its iron ore unit Kumba in South Africa. London-listed Anglo American is trading just shy of a year high, as is its PGM unit, Angloplat.

Top nickel and palladium producer Norilsk added 4%, lifting the company’s market value to above $34B, also a near one-year high. Number one listed copper producer Freeport McMoRan continued its strong run adding another 2.9% on Wednesday. Shares in the Phoenix-based firm are up 10% over the past week, despite troubles at its Indonesian unit.