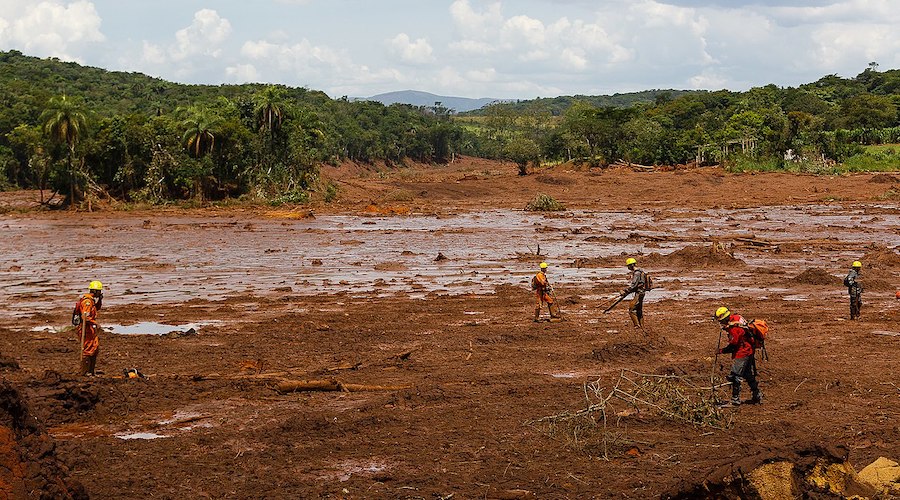 Rescuers in Brumardinho, Brazil, following the collapse of the dam at the Corrego do Feijão iron ore mine. Photo by Diego Baravelli, Wikimedia Commons.

Following the collapse of a dam at Vale’s (NYSE:VALE) Corrego do Feijão iron ore mine back in January, the southeastern Brazilian state of Minas Gerais signed a Memorandum of Understanding with tech company Inmarsat to monitor all tailings facilities in the region.

According to Inmarsat, the plan is to provide the state government with a smart monitoring solution which is based on IoT and satellite technology and can provide real-time visibility of conditions at tailings dams.

The technology relies on connected sensors that gather data related to piezometric pressure, pond elevation, local weather conditions and inclinometer readings. These data are aggregated at the ‘edge’ and transferred via a global L-band network to a cloud-based dashboard.

The information in the dashboard then allows companies, auditors and regulators to make decisions related to safety standards.

Conditions at the over 100 tailings dams that exist in Brazil are being heavily scrutinized after the disaster at Corrego do Feijão, which is located in Minas Gerais and which was not the first one of its kind in the state, as back in 2015 a dam failure at Samarco, BHP and Vale’s joint venture, killed 19 people and became the country’s worst-ever environmental disaster.

In March this year, state authorities placed the Sul Superior dam at Vale’s Gongo Soco mine at level 3 alert, which is the highest classification, as they feared that a landslide at the mine could destabilize the dam. Last week, fragments of the northern slope began to gradually slide into the bottom of the open pit which -according to Vale- reduces the risk of a dam break.

Sul Superior is one of 87 mining dams in Brazil built like the one that failed in January. All but four have been rated by the government as equally vulnerable, or worse. In fact, three months ago, a local court injunction forced Vale to freeze operations at 13 of its tailings facilities. Later on, the world’s top iron ore producer was denied stability certificates for at least 17 dams and dikes after their licences expired.

The South American country has also banned the construction of new upstream dams, which are cheaper but less stable than other types of tailings dams, and ordered the decommissioning of existing ones.

Brazilian prosecutors have also conducted a probe in more than 100 high-risk dams across the nation, arguing they doubted the legitimacy of the safety audits carried out at the mines, especially considering that Córrego do Feijão was certified as stable by German consulting group Tüv Süd only days before the accident that killed almost 300 people.