The price of copper dropped to a 15-week low on Monday after China fired back in the mounting trade war with the US. In afternoon trade, copper for delivery in July touched $2.709 a pound ($5,972 a tonne), down 2.4% from Friday’s settlement.

China will match 25% tariffs on $60 billion of goods imported from the US including precious stones like diamonds, rubies and emeralds, iron ore, and nickel, zinc and titanium, and rare earths. Lithium was spared and will continue to attract a 5% duty.

On Friday the US hiked tariffs on $200B of Chinese imports with nearly 6,000 products now incurring a 25% levy, up from 10% previously. The US imports some $540B worth of goods from China per year, while Beijing lets in $120B worth of imports. 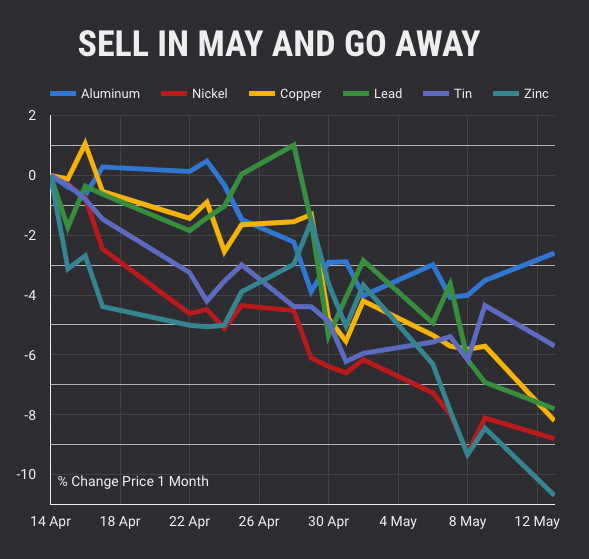 China imports nearly half of the world’s copper, and the country’s economic growth had been slowing well before the trade dispute began to impact the outlook for industrial metals.

China also imposed higher duties on a range of electronics and home appliances including television cameras, telecom equipment and microwaves.

In a note last week, Capital Economics points out that certain metals are “much more exposed to disruptions to US-China trade than others.” Given that electronics make up around 30% of total US imports from China, the prices of metals which are used widely in the electronics sector, tin in particular, appear especially at risk, the research firm said.

Apart from aluminum, which found support from news of refinery shutdowns in China, base metals declined across the board on Monday with the lead price dropping to a near three-year low. Also depressing prices was data showing that vehicle sales in China fell nearly 14.6% in April from last year, the 10th consecutive month of year on year declines.

Passenger car sales were harder hit, decreasing 16.6% year on year to 1.54m units last month, the 11th consecutive decline. Domestic sales for battery powered and hybrid cars came in at 91,000 units, down 17% from March but up 28.4% compared to the same month in 2018.