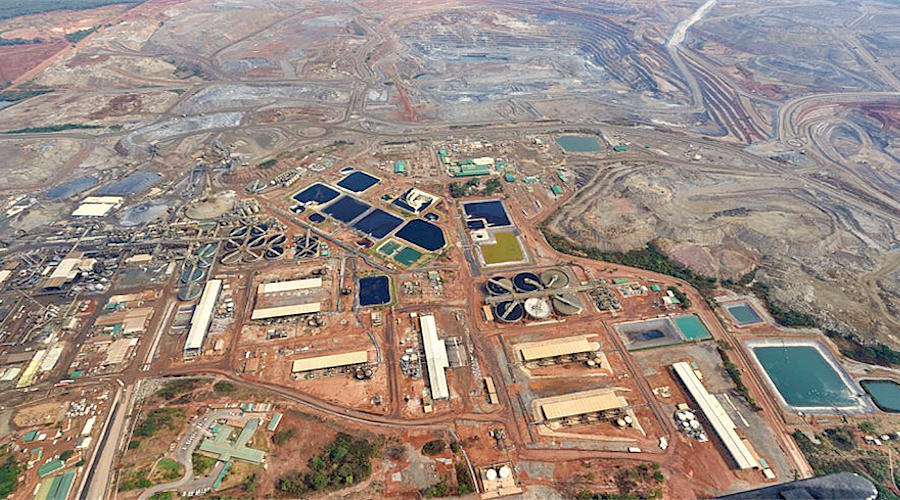 Zambia’s Chamber of Mines on Thursday delivered further signs of a major global undersupply of copper about to hit the market by announcing that the country’s output of the metal could be as much as 100,000 tonnes lower than last year.

The industry lobby group attributed the expected drop in production to changes to mining taxes introduced in January, which is driving companies to cut output.

“The new tax regime forced miners to do the unthinkable – cut production – because many cannot afford to continue producing as before,” it said in a statement.

Zambia, Africa’s second largest copper producer, churned out 861,946 tonnes of the metal last year. In the first three months of this year, the nation’s copper output fell by 11.3% to 195,244 tonnes, compared to the previous quarter, the Bank of Zambia said earlier this week.

The world’s main copper producing nations have been showing output declines this year, according to the latest monthly bulletin from the International Copper Study Group (ICSG).

Despite weaker copper production so far this year, ICSG data indicates a small surplus in February of 74kt with refined usage down 14% y/y, totalling 1,758kt (22,917ktpa).

Industry analysts at CRU believe that is undeniable that global demand for copper will soon surpass supply.

Over the past year there has been board approvals for several high-profile expansions and new copper projects that are due on-stream over the next five years.

While the effect on copper demand from the electric vehicles (EVs) sector is expected to be important, the consensus is that it will not meaningfully impact on demand until the second half of the 2020s, CRU says.

The red metal is a key component in the lithium-ion batteries used in EVs, as well as power inverters and in the charging infrastructure needed to keep them running.

Data released by the International Copper Association (ICA), an industry-funded body, shows more than 40 million charging ports will be needed over the next decade, consuming an extra 100,000 tonnes of copper a year by 2027. 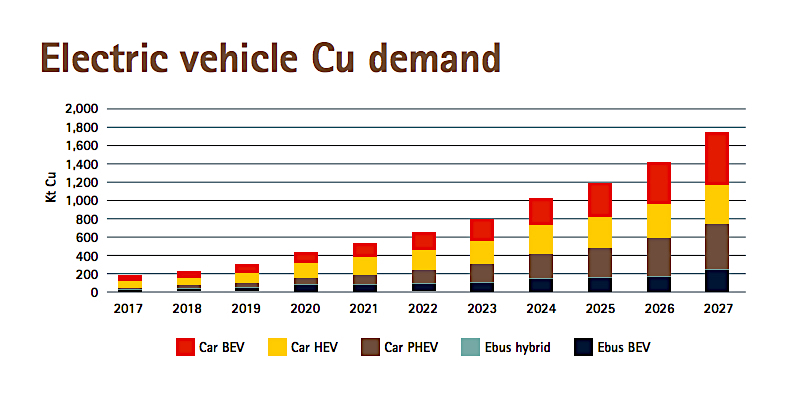 From those stations, at least 3 million will be built in China by 2030, according to the study.

Consumption from the car industry will also weigh on demand, but later. An average gasoline-powered car uses about 20 kg of copper, mainly as wiring. A hybrid needs about 40 kg and a fully electric car has roughly 80 kg of copper (176 pounds). 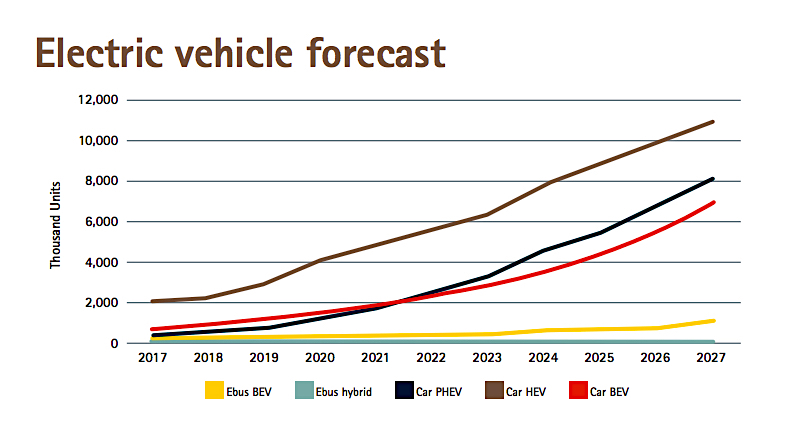 Copper demand will be substantially impacted by the growing market for electric vehicles (EVs) over the next decade. (Source Research commissioned by the International Copper Association (ICA).)

This means that, in the next decade, global copper demand will increase between 3 and 5 million tonnes, experts predict. Once electric vehicles become popular, they estimate demand to reach 11,000,000 tonnes of new copper for EVs alone.

Copper is also a key element in green technologies and renewables, which despite being adopted at a fast pace,  still represent only a minor percentage of the world’s total energy production.