The trade war has returned with a vengeance as copper and other industrial metals come under sustained fund selling pressure.

It has clawed its way back to $5,920 but with bearish funds still massing on the short side it remains to be seen whether this is anything other than a pause for collective breath.

Current market dynamics are a rerun of the price weakness in the third quarter of last year, with investors again focused on a deteriorating macroeconomic picture and the knock-on effect on metals demand.

And once again macro clouds are obscuring copper’s own resilient fundamentals in the form of weak mine production growth and supply chain disruption.

Return of the big short

Copper’s price slide has been accompanied by, and in part driven by, a dramatic increase in short positioning by money managers on the CME’s high-grade copper contract.

Funds have switched from being net long to the tune of 23,126 contracts in the middle of March to a net short of 45,677 contracts as of last week’s Commitments of Traders Report.

Outright long positions have been pared significantly over the past couple of months, but the real change has been a build in outright short positions.

The big fund short is back, the money men flexing their bearish views on copper out to 91,547 contracts. That’s a new record, eclipsing the previous record short of 87,942 contracts in July last year.

It’s another example of the increased speculative capacity on the CME contract. Volumes are down this year, but the decline should be seen in the context of exponential growth over the previous few years. Relative to 2016, for example, trading activity was up 28 percent in the first five months of 2019.

Open interest has increased steadily over April and May to 283,703 contracts, the highest level since July 2018.

It’s no coincidence that funds have turned negative on copper as hopes for a breakthrough in trade talks between the United States and Chile are fading.

“The vast bulk of clients” are expecting relations between the two countries to get worse before they get better, “with bearish implications for global growth and industrial metals prices”, according to Citi analysts (“Metals Weekly”, June 10, 2019).

Citi’s recent survey of its clients showed 81% of the bank’s customers expect tariffs to end up being imposed on all U.S. imports of Chinese goods, it said.

Any escalation of tariffs comes against a background of faltering manufacturing growth, particularly in China, which is the single most important economy for all things metallic.

The official Chinese purchasing managers index slipped into recessionary territory in May with a headline reading of 49.4 reflecting weakening new orders.

The complementary Caixin PMI, which captures activity among smaller and mid-size companies, held in weak expansion mode with an unchanged reading of 50.2 in May.

The broad takeaway is that China is still struggling to reinvigorate its manufacturing sector. Stimulus is again flowing through the economy, but this time it’s proving to be distinctly metals-lite.

Moreover, a stuttering Chinese growth engine is being compounded by growing evidence of a more synchronised global slowdown.

Manufacturing activity in the euro zone contracted for the fourth straight month in May, with the weakness spreading to the previously resilient United States.

The Institute for Supply Management’s (ISM) monthly survey showed U.S. manufacturing growth decelerating to its weakest pace in more than two and a half years.

An escalation of trade tariffs is only going to accentuate the growing sense of macroeconomic gloom, which is why the markets are back on presidential twitter alert.

“We had always expected China’s economy to slow this year but any further escalation in trade tensions clearly presents a further downside risk to our view of global growth and industrial commodities prices,” Capital Economics analysts wrote (“Commodities Update”, June 3, 2019).

Funds are expressing this renewed pessimism via short positioning on copper because of its exposure to global manufacturing activity, first and foremost Chinese activity.

Copper’s demand outlook may be dimming, but it’s turning out to be a weak year for supply as well.

Global mine production fell by 1.8% in the first two months of this year, according to the International Copper Study Group.

The mine concentrates segment of the market has been tightening in the form of sliding smelter treatment terms.

Spot terms, which is what a smelter charges a miner for converting concentrates into metal, ended May at their lowest level in six years, attesting to the current scramble for raw material in China.

The refined metal part of the supply chain looks less challenged, but it is worth noting that global exchange inventory ended May at 406,000 tonnes, almost half what it was at the same time last year.

Throw in continued upheaval in the scrap sector, thanks to China’s steady tightening of import quality controls, and the copper market looks on shaky supply ground.

Right now, such considerations are being subsumed by the broader fear that the world is heading towards manufacturing recession in a process that will only be accelerated by the imposition of further trade sanctions by either the United States or China.

However, with every sign that this is shaping up to be one of those years of minimal or zero production growth, the scale of funds’ big macro short risks a micro counter-reaction.

(The opinions expressed here are those of the author, a columnist for Reuters) 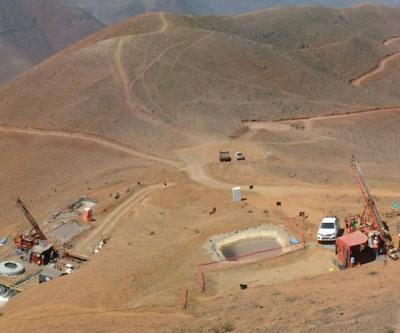 Expanded drilling at the Chapitos gold-copper project is expected to commence during the latter half of 2019.
MINING.COM Staff Writer | June 10, 2019 | 6:57 am