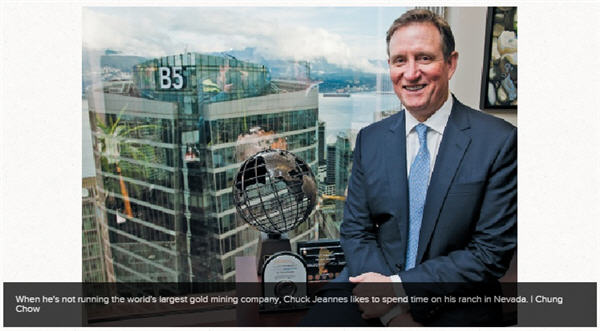 While at the World Economic Forum in Davos, Switzerland, in January, Chuck Jeannes, CEO of Goldcorp Inc. (TSX:G), got the chance to needle Lloyd Blankfein, CEO of Goldman Sachs (NYSE:GS), over his firm’s predictions last year that gold would drop to about US$1,050 per ounce by the end of 2014.

“I was so excited to tell him, ‘You were wrong,’” Jeannes said, raising a laugh from junior miners attending the Association for Mineral Exploration BC’s (AME BC) recent annual mineral exploration roundup, where Jeannes was a keynote speaker.

“The very next day, they put out another projection, and they’re going to be wrong again,” Jeannes said.

Despite a steady, two-year slide in gold prices, generally miserable market conditions for the mining sector as a whole and a strengthening U.S. dollar (typically a negative for gold prices), Jeannes is bullish on gold because, in his view, the world is entering a peak gold era.

“Our industry is never going to mine as much gold as this year,” Jeannes said. “I hope I’m wrong. I hope there’s some magical technological breakthrough that changes this, but if it happens, it’s not going to happen for a long time.”

He should know what he’s talking about. After all, he’s the CEO of what is now the world’s largest gold mining company, and he didn’t get there by accident. He got there by being able to judge where the industry was going and taking calculated risks.

Born and raised in Nevada, Jeannes studied law and spent 12 years as a practising lawyer.  He did a lot of work for mining companies, including Placer Dome, which asked him to become its in-house legal counsel.

When Placer Dome moved its headquarters to Vancouver, Jeannes and his wife, Susie, and two children moved here in 1997.

He spent two years here, then moved back to Nevada in 1999, when Kevin McArthur, CEO of Glamis Gold Ltd., managed to woo him away from Placer Dome.

Then, as now, gold prices were plunging – falling below US$300 per ounce.

“Chuck’s first assignment was to save Glamis’ New York Stock Exchange listing because our share price was touching $1,” said McArthur, who is now CEO of Tahoe Resources Inc. (TSX:THO). “In the next seven-year period, Chuck was instrumental in four mergers. We built five mines in a seven-year period and our share price went from $1 to $56 dollars over that period of time.”

In 2006, Glamis was taken over by Goldcorp. McArthur become Goldcorp’s new CEO. Jeannes moved back to Vancouver, as executive vice-president of corporate development for the newly merged company. Goldcorp’s chairman, Ian Telfer, succeeded McArthur as CEO, and when Telfer stepped aside, Jeannes was tapped as his successor in 2008.

Despite living in Vancouver since 2006, Jeannes doesn’t spend a lot of time here. He spends two to three weeks of every month travelling and spends most of his long weekends on a small cattle ranch that he bought in Nevada. When he’s not on his ranch, where he likes to hunt, he spends his leisure time fishing and boating.

As a boater, he is keenly aware of that old adage about falling tides lowering all boats. As with most mining companies, Goldcorp has seen its stock values fall, as investors have abandoned mining stocks. The company also announced last month that it expects to record a multibillion-dollar writedown on its Cerro Negro mine in Argentina.

Mining companies must shoulder some of the blame for their current predicament, Jeannes said, because, despite a period of record high gold prices, many gold miners still couldn’t provide a good return to shareholders.

“We have to accept a lot of the blame for costs going up because we allowed the grade to go down,” he said. “We lowered our cutoff grades, we chased marginal ounces and, as a result, we saw higher costs.

“We allowed the costs to go up at exactly the same rate as the gold price and so the margins never grew. We were making the same profit margin at $600 gold as we did $1,200 gold.”

Goldcorp has recently risen to the top to become the world’s largest gold mining company, based on market capitalization ($24 billion). It has done so through a strategy of acquisition, financed in part through the sale of none-core assets.

The company now owns 10 operating gold mines, has several projects in development and employs 19,000 people worldwide, about 150 of whom work out of Goldcorp’s head office in Vancouver.

“We want to be the best company, not the biggest,” Jeannes told Business in Vancouver in an interview the day before his address to the AME BC roundup.

“And in order to achieve that, as you add new high-quality projects, you have to be willing to sell off your non-core things, and I think we’ve been better at that than any other gold company, so I’m quite proud of that. And that’s allowed us to finance our growth without having to take on a whole bunch of debt.”

He cites the spin-out of Silver Wheaton Corp. (TSX:SLW) as an example. Goldcorp, which owned Silver Wheaton, divested all of its assets in the company in 2008.

“We ended up selling our interest there for almost $2 billion, and that’s what funded our Peñasquito mine in Mexico, without having to take on a whole bunch of debt.”

Goldcorp’s most recent acquisition was an all-stock deal worth $526 million for Ontario junior miner Probe Mines Ltd. (TSX-V:PRB) – a deal that is still being finalized.

That’s not the big fish that Jeannes – an avid fly fisherman – had hoped to land, however. Goldcorp had bid $3.6 billion on Osisko Mining Corp. (TSX:OSK) – a bid that turned hostile last year and which Goldcorp eventually walked away from when competitors upped the offer to $3.9 billion.

One of Jeannes’ business practices is to identify and address problems within the company early on.

“We have a meeting every Monday morning and my No. 1 goal in that meeting is to get somebody to put an elephant on the table  – something that may be a little bit uncomfortable, that may be an issue that’s brewing. Because I don’t want it to brew; I want it to be resolved.”

One of the biggest elephants in the room right now for the mining industry is the lack of financing available for exploration.

“We’re discovering fewer and fewer ounces every year and that has to translate into lower production in the future,” Jeannes said. “If you look at the rate of discovery over the last decade, there’s just not enough replacement reserves to turn that around. So we’re going to see, in our view, peak gold either this year or next year.”

As the world’s gold supplies tighten, gold prices will go up – slowly, he predicts. He estimates it will trade at $1,150 to $1,300 per ounce in the coming years.

“These things always cycle,” Jeannes said. “When the gold price runs, that will free up capital dollars to invest in exploration, and we’ll see a recovery of the junior exploration space – I have no doubt about that.”