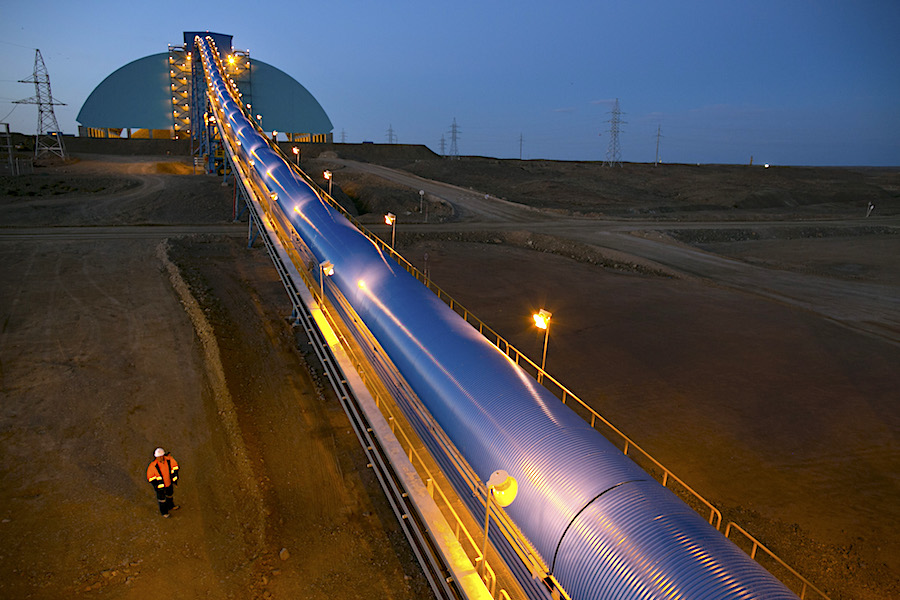 Workers walk along the conveyer belt used to move ore to the concentrator area at the Oyu Tolgoi mine. (Image courtesy of Rio Tinto.)

SailingStone Capital, the second largest shareholder in Rio Tinto- controlled Turquoise Hill (TSE, NSYE: TRQ), is expected to vote against the re-election of the Canadian miner’s board members this week, during the company’s annual meeting.

The San Francisco-based investor claims the four independent directors were handpicked by Rio and are not representing the interest of all investors.

The investment group’s discontent with the way the world’s No.2 miner has handled many decisions related to the Oyu Tolgoi copper-gold-silver mine in Mongolia goes back over five years.

During that time, SailingStone has accused Rio of wielding too much influence over Turquoise Hill, the Canadian miner that owns 66% of the massive mine in Mongolia and acts as its operator.

Rio approved a $5.3B underground expansion of Oyu Tolgoi, one of its most important growth assets, in 2016. Early progress was hampered by a series of disagreements with the country’s government, including differences over taxes owed and a power contract.

The US investor’s position is that Turquoise’s declining share value and recent setbacks at Oyu Tolgoi have little to do with the risk profile of the mine and Mongolia and everything to do with avoidable mismanagement, and a “failure of market confidence” in governance at Turquoise Hill.

Oyu Tolgoi was discovered in 2001 and Rio gained control of the mine in 2012. Once finished, the ongoing extension of the mine (now expected to be done in 2022) will lift production from 125–150kt in 2018 to 560kt of copper concentrate at full tilt. That would make it the biggest new copper mine to come on stream in several years.

Turquoise Hill shares are trading about half the value of 12 months ago, and were last down 2.99% in Toronto on Monday to C$1.78, which leaves its market capitalization slightly over C$3.5 billion.