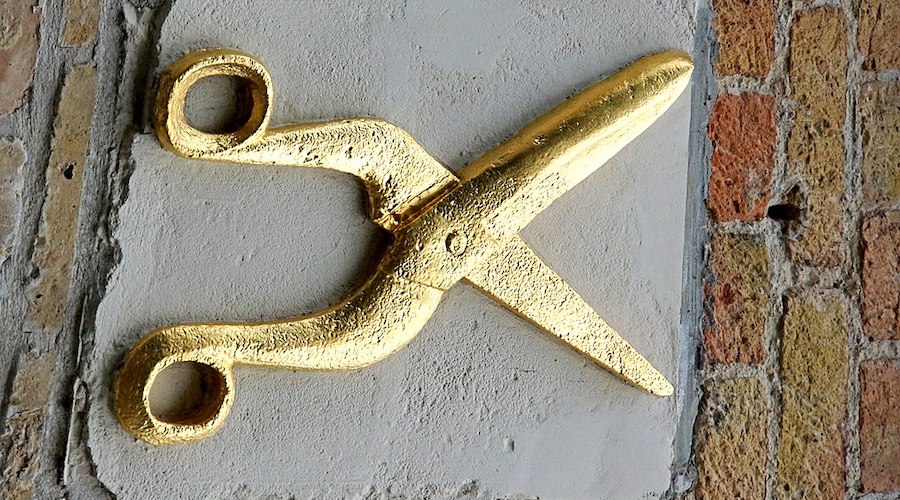 After a short rally at the start of 2018 year peaking at $1,354/ozt on March 25, the gold price fell steadily during Q2 and Q3 to USD 1,176/ozt on August 16, and then rebounded to $1,280/ozt on December 28. We analysed the effect of the gold price on the gold mining industry using data from the Mining Intelligence Data Application. The data we used represents companies reporting quarterly production and listed on the following stock exchanges: TSX (+TSX-V), ASX, LSE (+LSE-AIM), NYSE, and JSE.

Major gold producers’ global aggregated quarterly operating income followed the gold price and shrank by 44% during the year, from  $2,500 million in Q1 to $1,400 million in Q3 and remained steady in Q4 2018 (Figure 1).While aggregated operating income is often considered a reliable indicator to measure operating efficiency and performance, we dug deeper in our Q4 2018 review of the gold mining industry. We looked at three further metrics: quarterly gold production, all-in sustaining costs, and capital raisings. The data indicates the following: 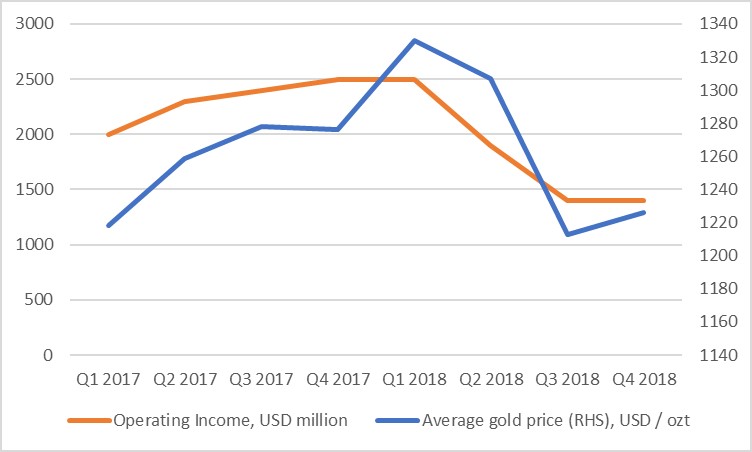 Reported global average quarterly all-in sustaining costs were 3% lower than in Q3 2018. Overall, gold producers reacted relatively quickly to the deteriorating gold market conditions and managed to reduce their costs by making efforts to catch up with shrinking margins.

The three regions that drove the 2% quarter on quarter increase in global gold production were North America (+266 kozt, or up 7%), South America (+215 kozt, or up 10%), and Australia & Oceania (+148 kozt, or up 5% from Q3 2018). Production in Asia took a nosedive — dropping 32% due to significant decrease in gold output recorded at Indonesia’s Grasberg mine. 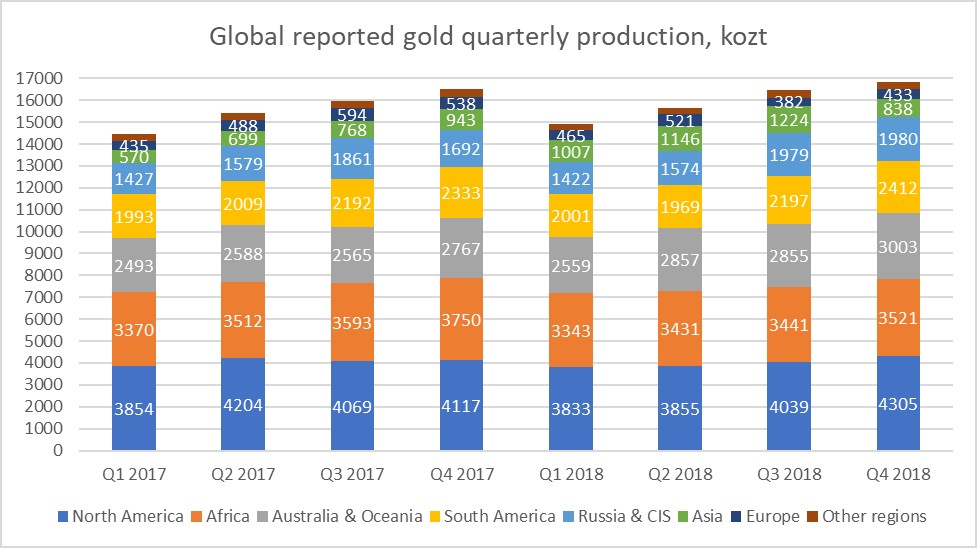 With 620 kozt of gold mined in Q4 2018, Barrick’s Goldstrike production center in Nevada, USA, was the world’s lead gold operation, well ahead of its competitors (Table 1).

Indonesia’s unique Grasberg gold-copper mine — control of which was transferred from Freeport McMoran to the local government — lost its first place in global production ranking in Q4 (391 kozt) because of a drastic drop in gold output due to the transition from open-pit to underground mining. Despite this, Grasberg took over the position of being the world’s biggest gold producer from Muruntau mine in Uzbekistan (state-owned, thus not shown in this review due to lack of reported quarterly production numbers) by the end of 2018. Annual gold production at Grasberg jumped to a record 2.7 Mozt level in 2018, or up 73% compared to 2017.

Third and fourth in this ranking are Polyus Gold’s gigantic Olimpiada mine in Russia (345 kozt) and Barrick’s Pueblo Viejo mine in Dominican Republic (277 kozt).

Seven out of the top 10 biggest gold mines reported growth in Q4 2018 gold output while three faced declining production rates. The biggest gains in gold production were achieved at Kumtor (up 86%), Lihir (up 38%), and Geita (up 22%) mines. 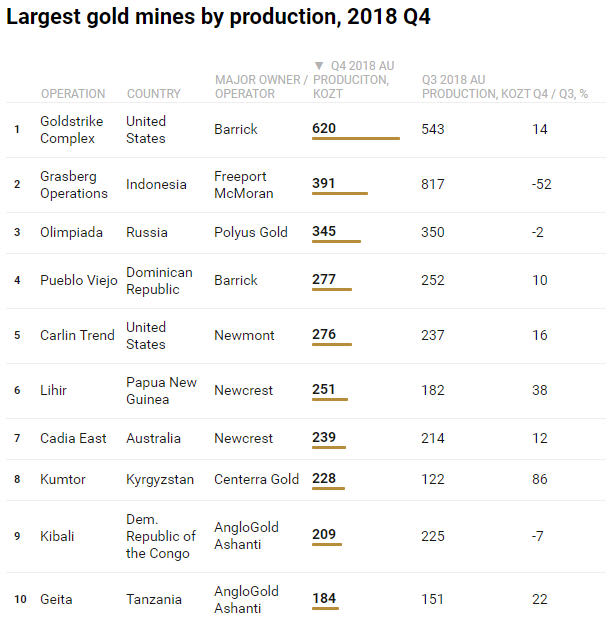 Mining Intelligence focused on primary gold operations’ AISC, i.e. mines where gold contributed to 80% and more of revenues from operating activities generated during the quarter. The ranking excludes tailings re-processing operations, mines where the precious metal is produced as a by-product, and operations where companies report gold-equivalent output. 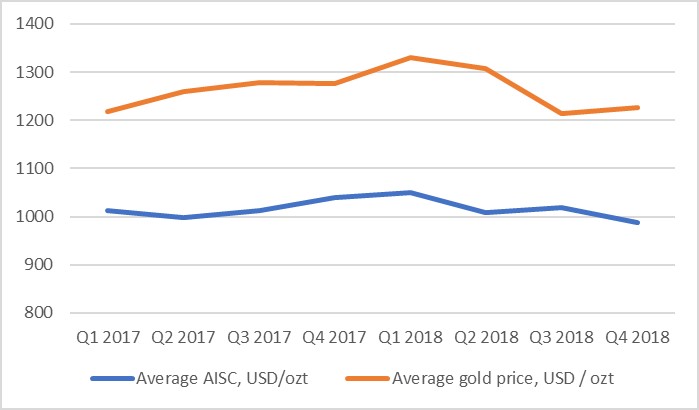 With $332/ozt, Kirkland Lake’s Fosterville mine in Australia was the lowest cost gold operation in Q4 2018 measured by AISC. In Q4, Fosterville mine’s ore grade was impressive at 39.7 grams of gold per tonne of milled ore, making this the world’s highest-grade major gold mine.

This was followed by Polyus’s unique Olimpiada mine (USD 389/ozt) in Russia, Nord Gold’s Neryungri mine ($441/ozt) in Russia, and Centerra Gold’s Kumtor mine ($508/ozt) in Kyrgyzstan. 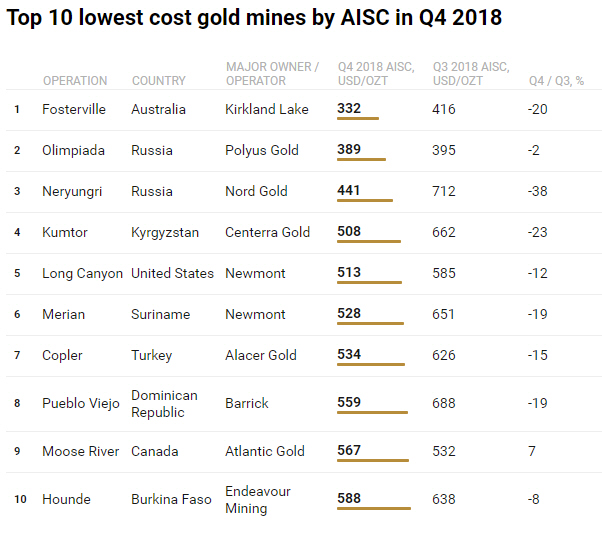 The strength of equity markets is a barometer of investor confidence. The amount of capital raised through equity placement directly reflects the sentiment in the mining industry. This indicator clearly shows that in Q4 2018, investors began to regain some confidence in the gold mining industry, with gold producers, developers, and explorers at major exchanges raising 17% more capital compared to Q3 2018 (Figure 4). 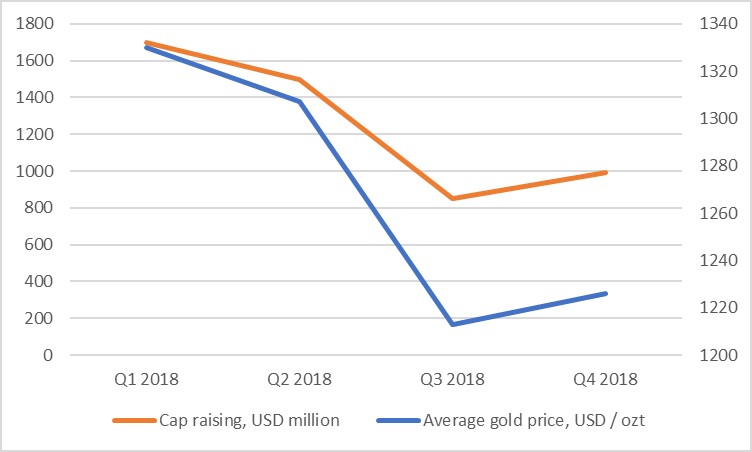 In Q4 2018, reported gold production continued to increase and global average all-in sustaining costs continued to go down. This is a very positive indication that overall, gold miners are continuing to watch their costs closely while producing more gold. After two very challenging quarters, steady Q4 operating income is likely a result of the improving market conditions. Investors’ confidence in the gold mining industry, while at a low in Q3, has followed the upward trend of the gold price in Q4.

The underlying data for this article is from the Mining Intelligence Data Application.