Demand for copper is set to rise with the boom in electric cars. (Image by Scharfsinn | Shutterstock.)

The world’s largest miner, BHP (ASX, NYSE: BHP), has lifted its forecasts for the global adoption and sales of electric vehicles (EVs), but warns the electrification of the transport sector will proceed only as fast as the development of charging infrastructure does.

BHP now estimates that at least 132 million EVs will be on the world’s roads in 2035, and at least 561 million by the middle of the century. These numbers are its “low-case” forecasts, and it also suggested take-up could be higher.

Huw McKay, BHP’s vice president, market analysis and economics, said Tuesday the company estimates EVs comprising at least 7% of the world’s light vehicle fleet in 2035, up from 5% in previous estimations.

By 2050, the mining giant expects more than one in four light vehicles on the world’s roads to be EVs, or 27%, up from its earlier forecast of 21%. 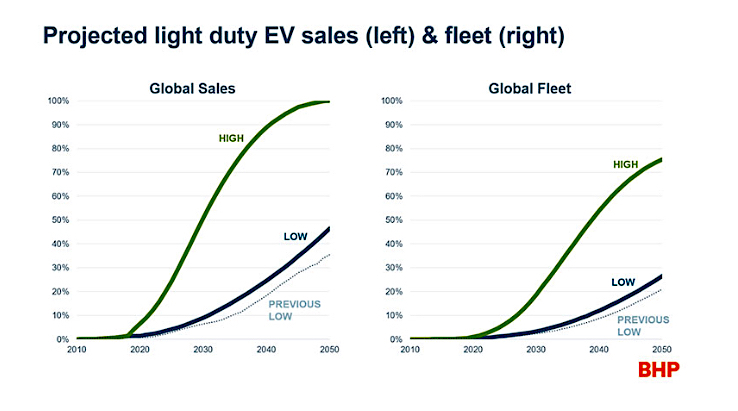 BHP, already the world’s second-biggest listed copper miner, has been taken steps towards increasing its presence in the red metal sector and other battery metals markets as of late.

Copper is a key component in the lithium-ion batteries used in the electric vehicles, as well as power inverters and in the charging infrastructure needed to keep them running.

BHP has also revealed plans to transform itself into the world’s biggest suppliers of nickel sulphate — another key component in lithium-ion batteries that power EVs.

Only last week, chief executive Andrew Mackenzie reaffirmed BHP’s commitment to supply the EV markets by announcing it would not divest its Nickel West operation as previously planned.